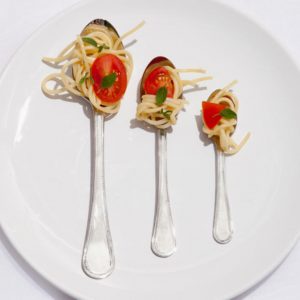 Weight loss is tough and portions matter if you’re serious about trying to lose weight. While eating raw vegetables probably won’t require you to have portion control, since the amount of fiber in them will fill you up before you add enough calories to make a difference. At one time it was thought that too much fruit had a negative effect, but since, most studies show that again, the fiber content will fill you up before you can eat too much to fill you out. Both of these types of whole foods should be eaten frequently throughout the day. However, for all other foods, portion control counts.

Drinking water before a meal will help with portion control.

Sometimes, the urge to eat doesn’t come from hunger, but dehydration. If you drink plenty of water throughout the day, you’ll probably find you’re less hungry. Also drinking a large glass of water before you eat can make you feel fuller so you want to eat less. Remember to use plain water, or water with a tad of lemon in it, rather than other types of drinks. Soft drinks are filled with extra calories and even diet soda has a negative effect causing weight gain. Stick with a large glass of water before meals and portion control will be easy.

It almost seems to simple, but it’s true. Using smaller plates will visually trick you into thinking you ate more than you did. One study showed that people who used larger bowls compared to those given smaller bowls, served themselves 33 percent more food (In the case of the study, it was ice cream). The study also used two different sizes of scoops. Those who had larger scoops served themselves 14% more ice cream. The color of the dishware mattered too. The higher the contrast of the plate to the food, the less was eaten. If you’re eating pasta, don’t use a white plate, but opt for a brightly colored one. For salads and lower calorie foods, blend in with a green plate.

It doesn’t matter whether it says diet, you can’t eat the whole box!

Not only are there plenty of other reasons not to eat special “low calorie diet” foods, one of them is portion control. Just because the box of cookies says it’s lower in calories, it doesn’t mean you can eat the entire box…or maybe two….in one setting. While some natural sugar substitutes, such as Xylitol have some benefits, However, even artificial sweeteners can create that craving for more sugar and make dieting more difficult.

You can eat the same portion of a food if you add more bulk with vegetables. Consider a plate of pasta, now add broccoli, cauliflower or other veggies to it in a 50/50 ratio. When you eat the same portion, you’ll be adding fewer calories while still satisfying your hunger.

Let your clothing be your guide. If you’re wearing sweats to every meal, the chances of overeating are greater than if you’re eating food in form fitting pants. When you feel that snugness from the pants, you’ll have automatic portion control.

Eat slower. The slower you eat, the more time you give your body a chance to signal your brain that you’ve had enough.

Eat more foods that make you work. It’s harder to eat too many pecans when they’re in the shell, requiring you to crack them first. 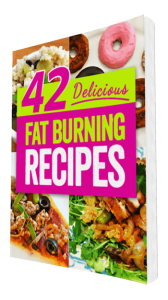